(This is a trip report I had done for a Yellowstone forum back in 2011.  I recently migrated here to my personal page.)

After leaving Fishing Bridge around 5pm and driving back to Mammoth in some bad snow, we had smooth sailing on our way back to back Silver Gate, until we go through Lamar. By then it was dark and the snow was piling up on the road and visibility was very limited. There were no tire tracks in the snow in front of us and it was like traveling at Star Wars warp speed with the snow flying toward our window shield. Finally, 11pm and we were back in Silver Gate for the night, tired and a bit hungry. The Lamar Pack had not taken any animals in the past two days. They were due and with the fresh snow on the ground, there was no way we were not going to miss daybreak in Lamar the following morning.

The 4am alarm went off and we got ready for another full day in the park. We were on the road shortly after 5am.

Cell phone picture of our cabin that morning.

We had not seen a vehicle until we hit Hitching Post and Doug from Silver Gate Cabins was there looking about. I walked up and said “great morning to see the wolves with the snow” and he replied back that it may already be over as he caught a glimpse of a black wolf traveling toward where they cross to the den site. With no wolves in site we traveled down the road, watching a mule deer run east along the opposite side of the river and we looked at each other not recalling seeing mule deer in this area before.  Around the bend in the road, below Confluence (confluence of Lamar River and Sode Butte Creek) , Rick Mcintyre was stopped in the road. There were wolves crossing the road. We stopped and watched the Lamar Alpha male 755 cross the river, road and go up the hill to the north and above us. Once at the top he traveled along the edge back east behind us giving us a quick glimpse as he went by until he disappeared. 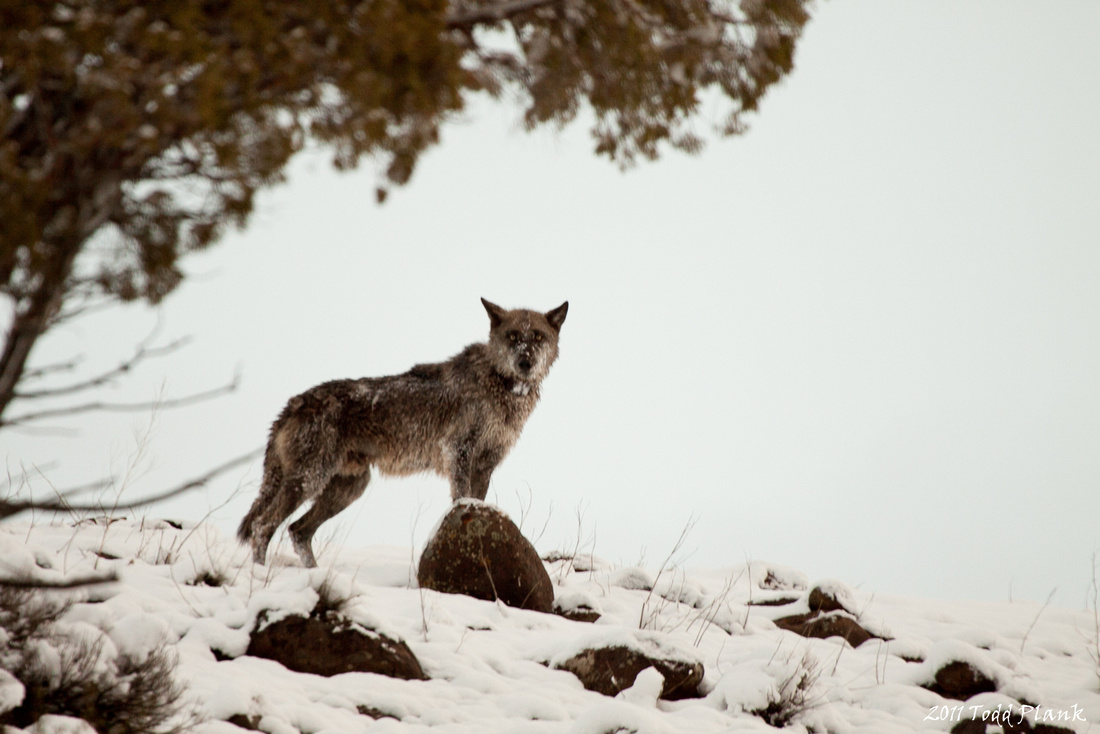 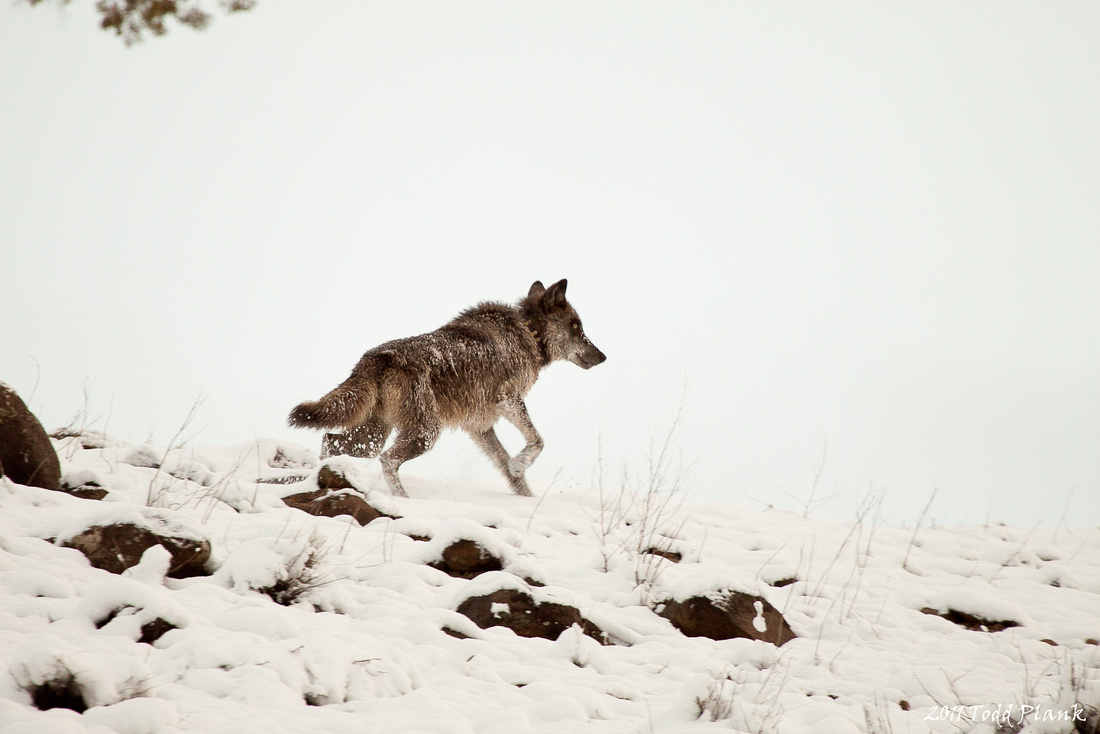 Back on the other side of the river we found Lamar Alpha female ’06 following in her mate’s path, crossing the river, road in front of us and part way up the hill. ’06 turned around, back across the road and back across the river. 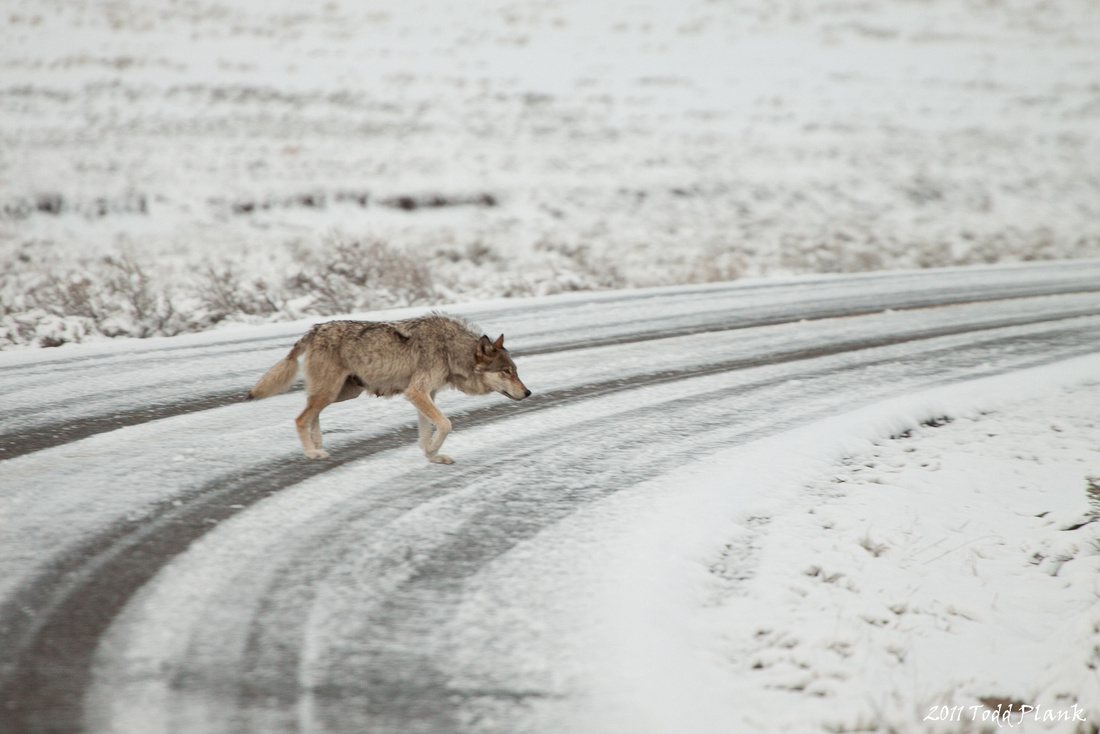 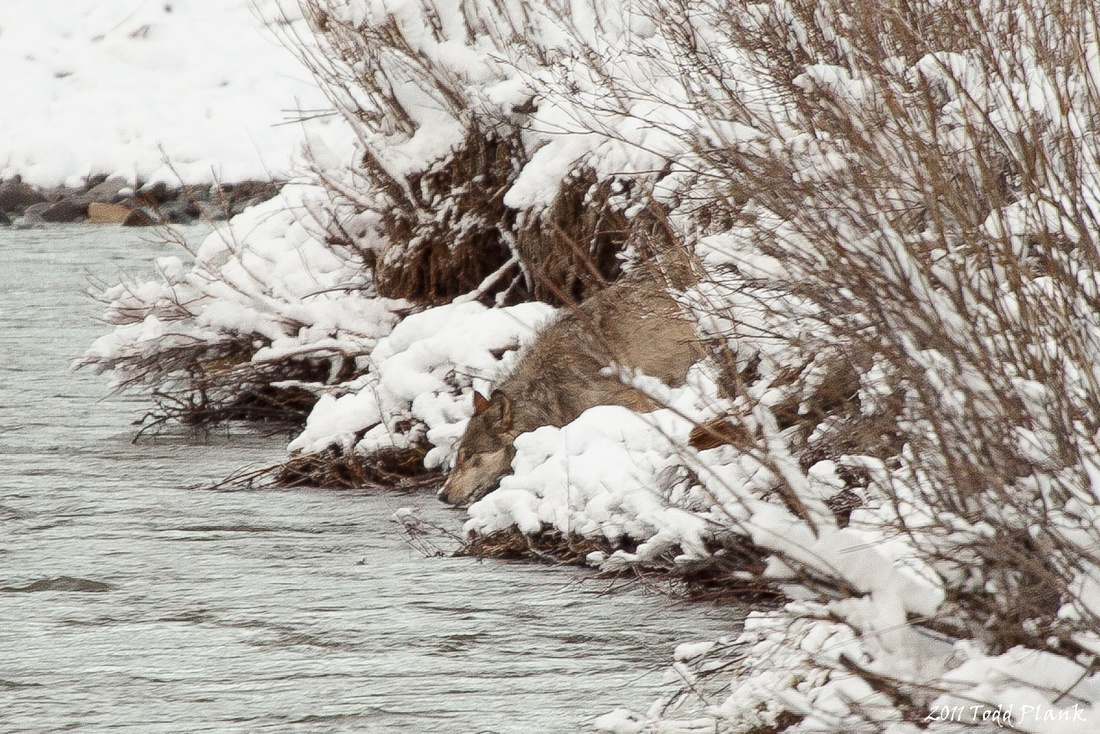 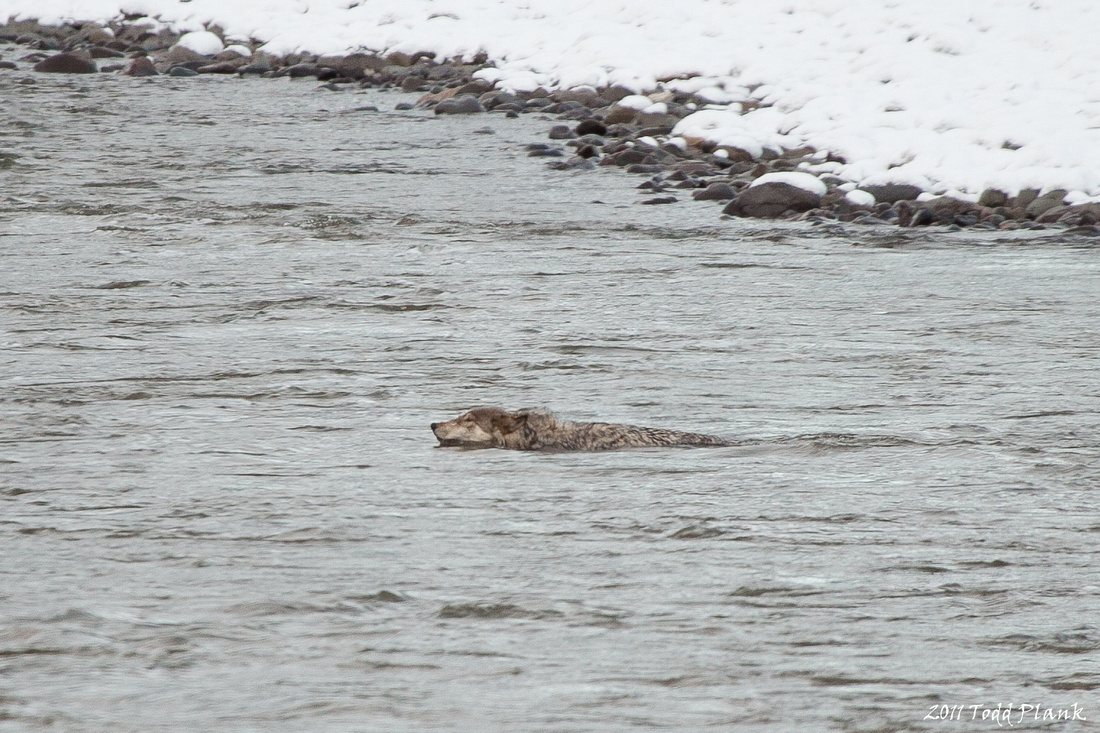 Once on the other side she made her way east along the river and this is where we got back in our vehicles and turned back around towards the pullout at Confluence.

Once around the bend we see 755 had come down off the hill, crossed the road and river and taken out the mule deer we saw just a few minutes earlier. 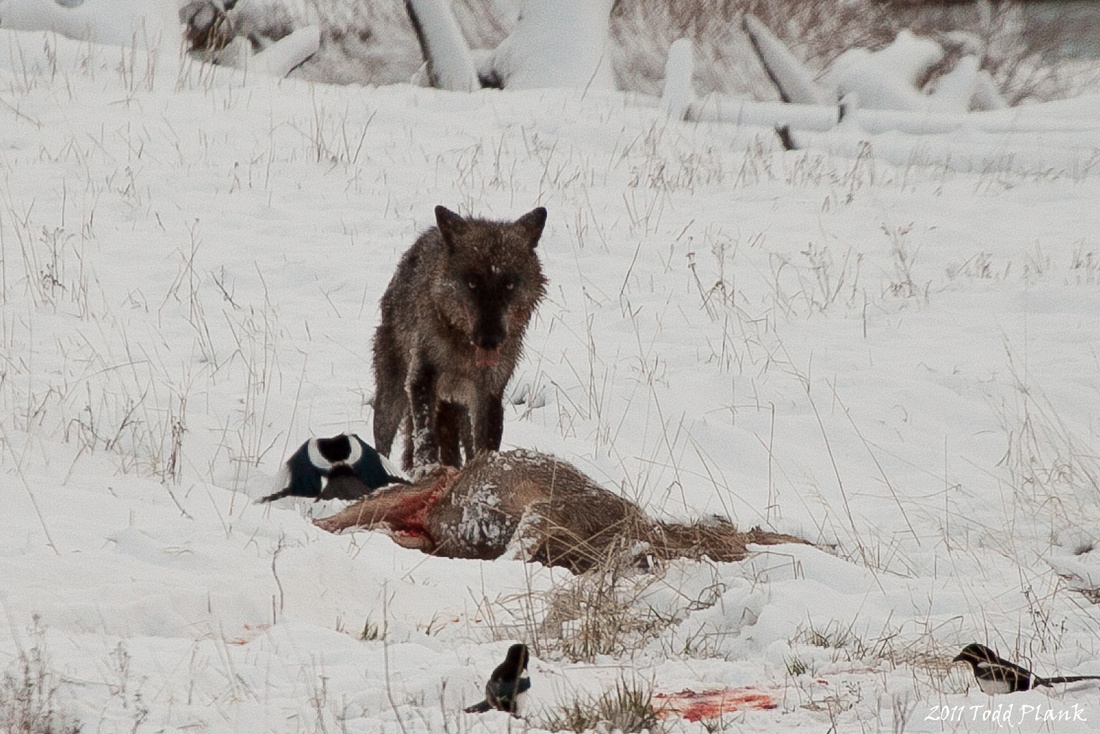 755 proceed to remove his prize from the deer and head back into the willows to enjoy his meal in peace. ’06 was fast approaching along and through the Confluence area, nose in the air guiding her to the deer her mate had taken down. 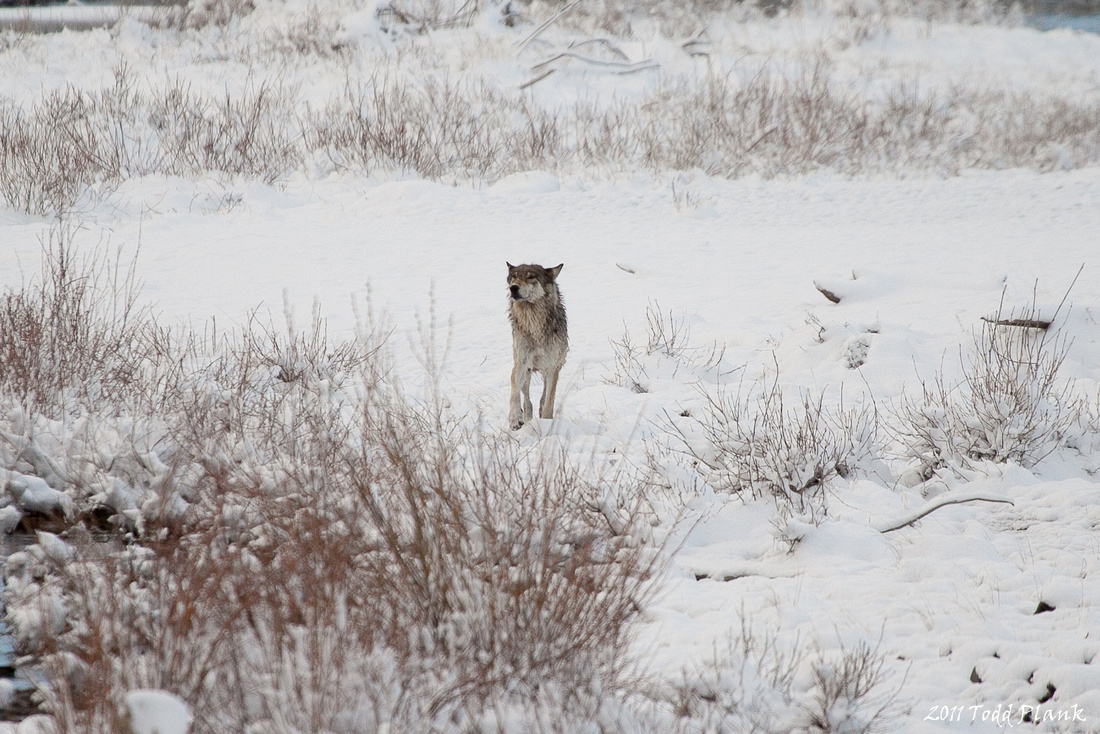 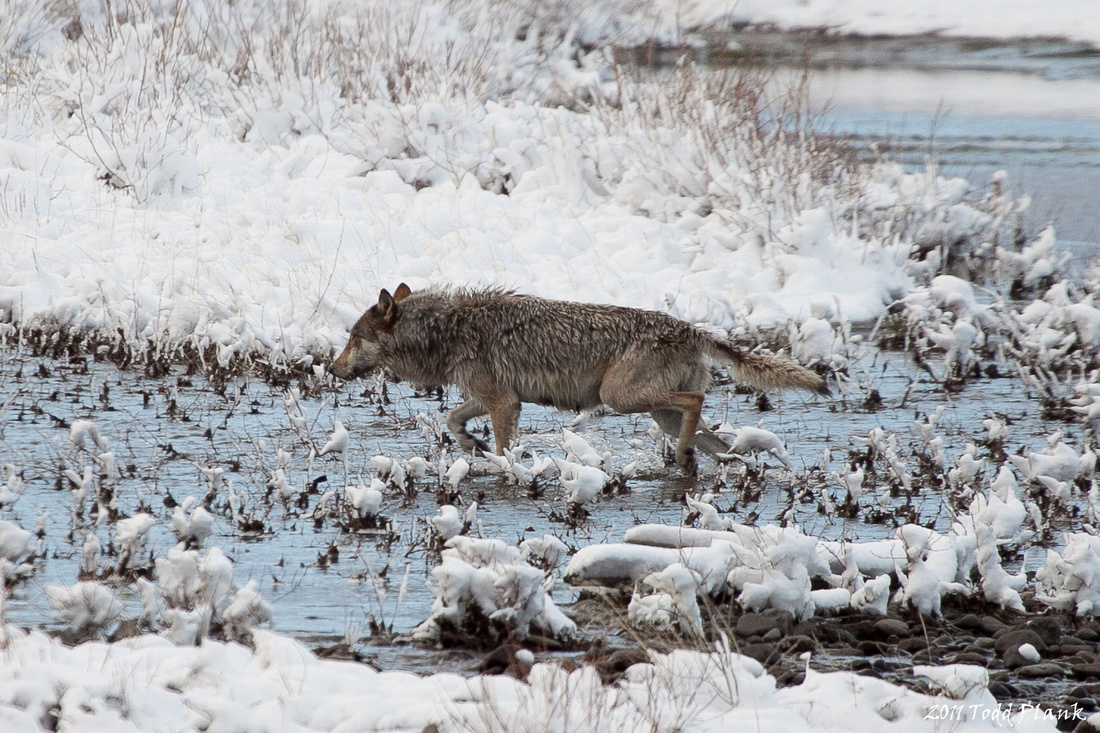 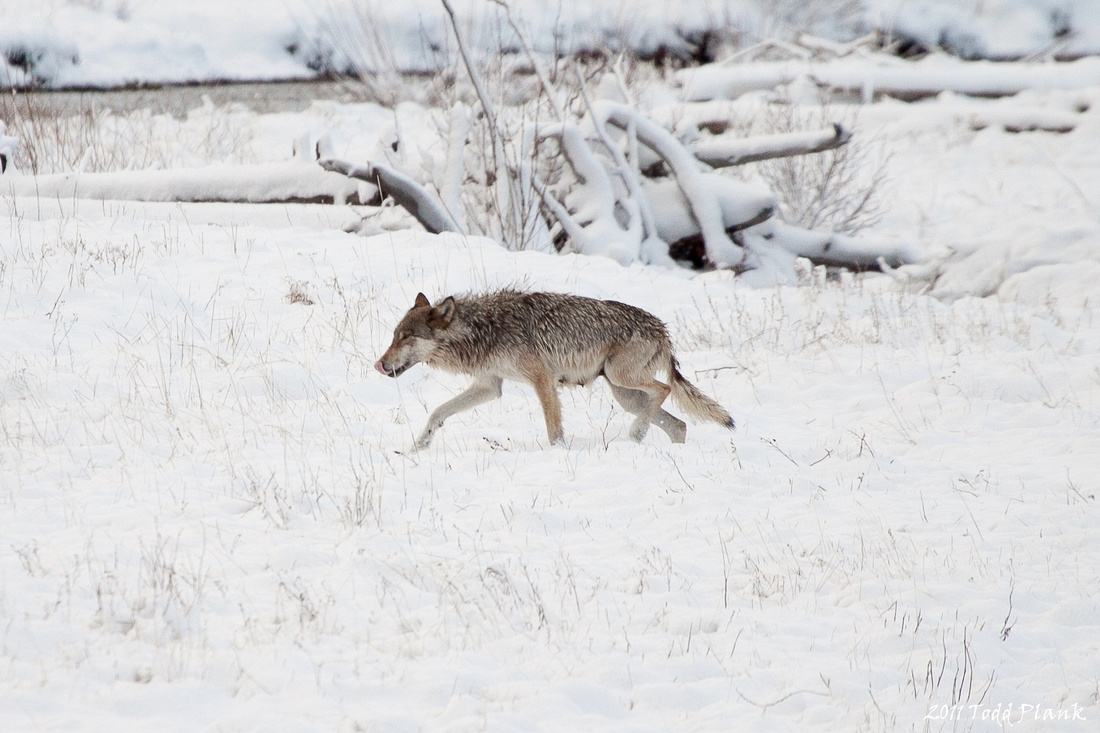 And finally finding the carcass. 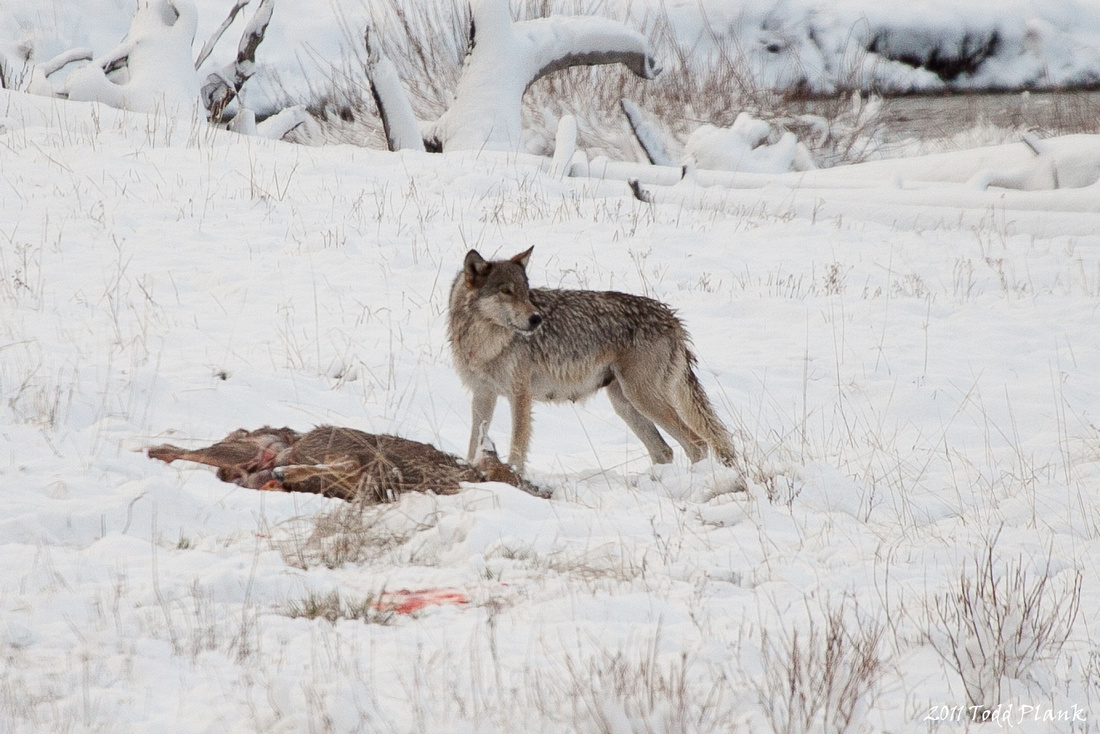 755 returned from the willows to join his mate. 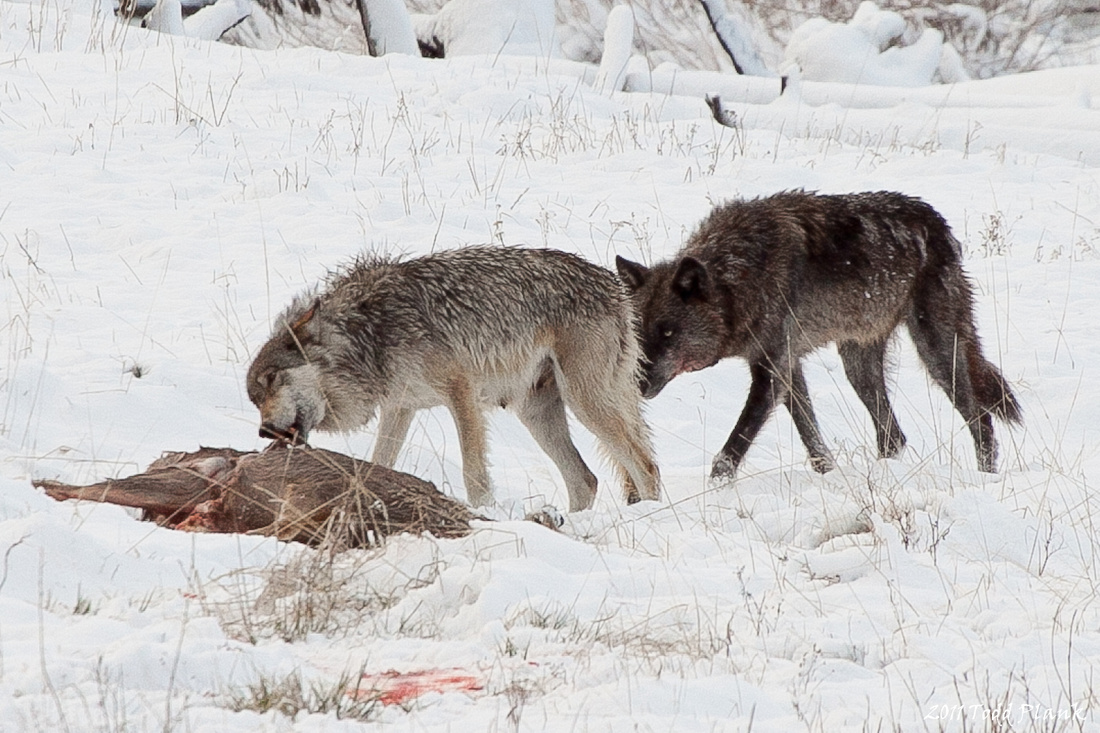 Only 30 minutes had gone by so far since this all started.

The two wolves continued filling their stomach while ravens quickly congregrated waiting their turn or a chance to steal a morsel. Everyone once in a while the wolves would chase at the ravens. 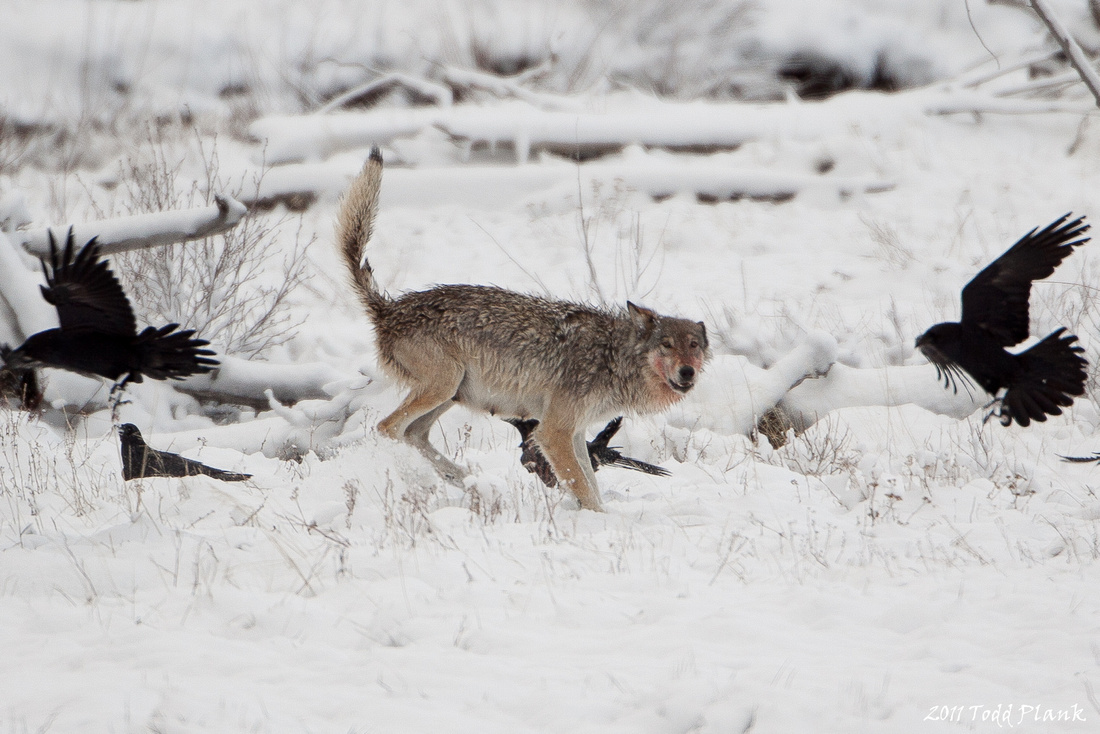 Back at the carcass, wolves doing what wolves do….. 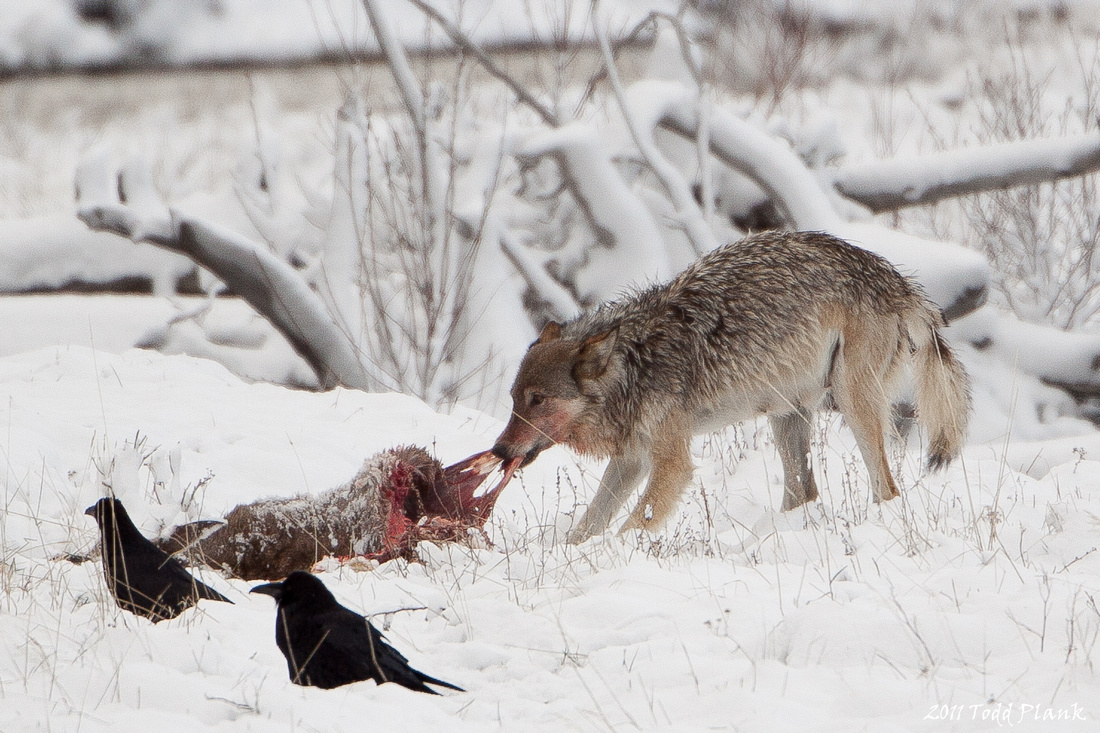 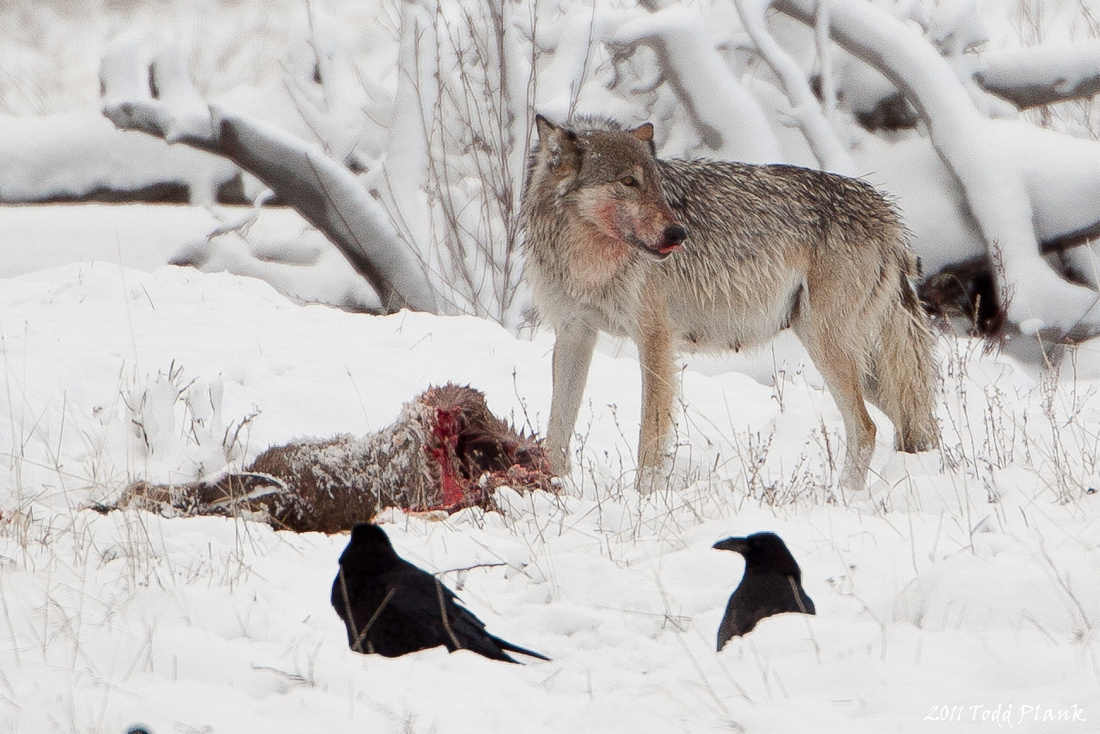 Until a grizzly show up and takes possession of the carcass, chasing the wolves off. 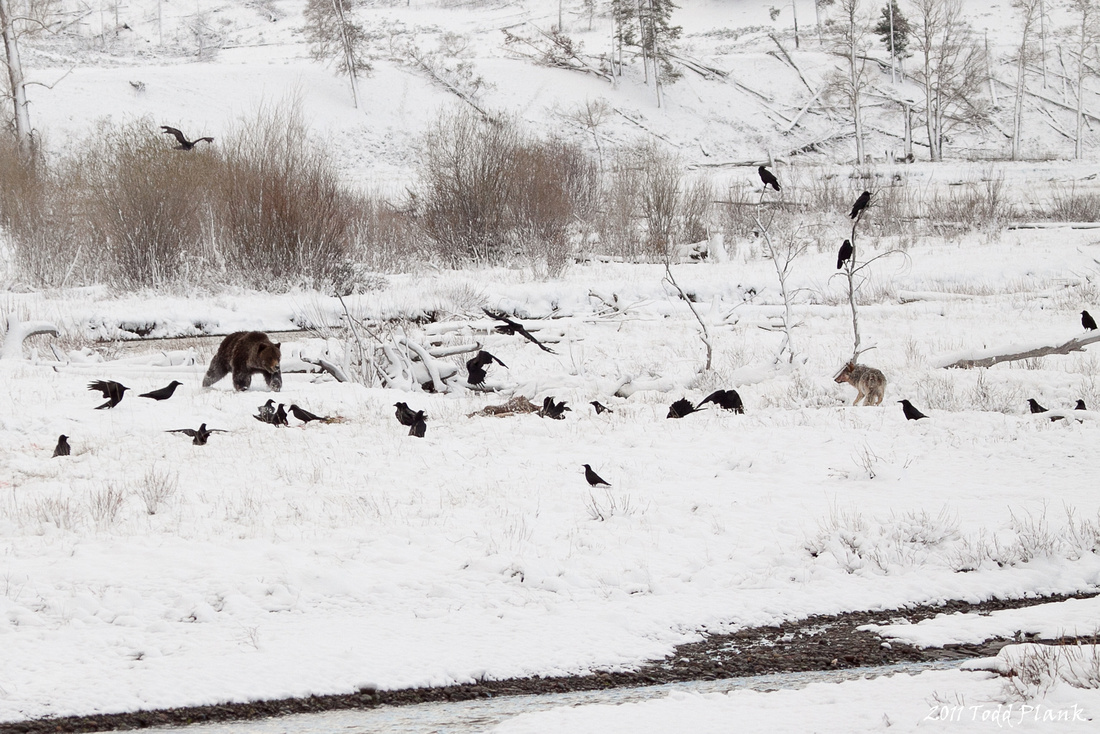 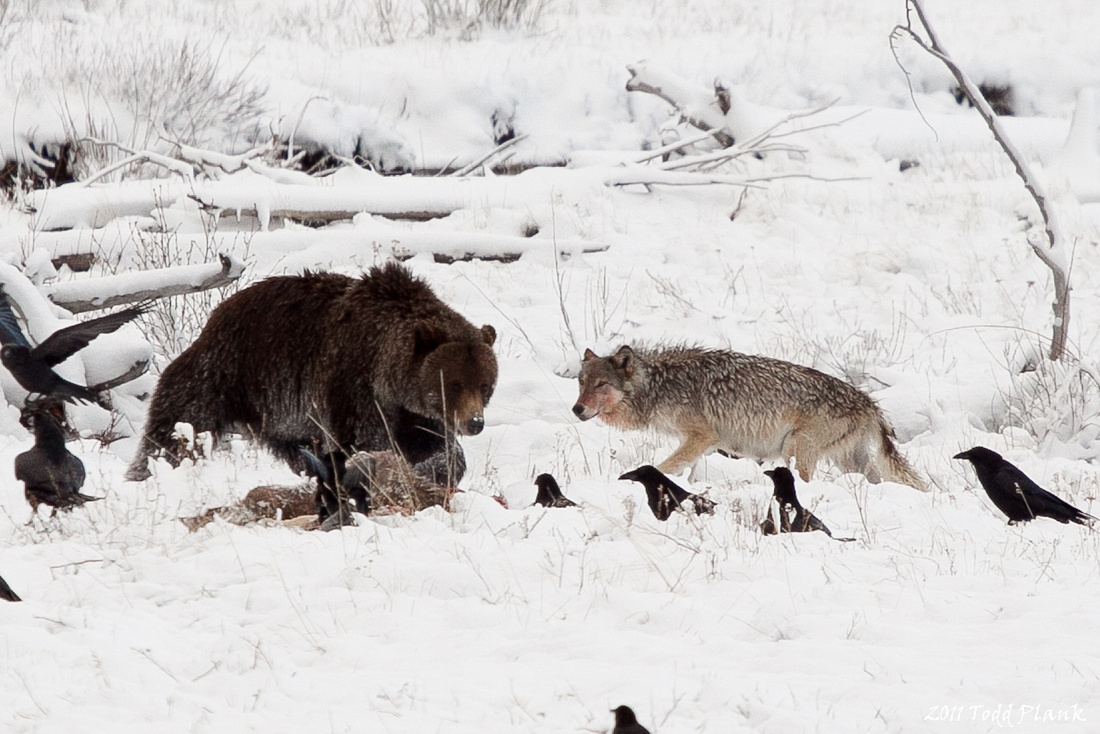 755 came back and gave the bear a nip in the butt prompting the bear to turn and swat at him but wolves are no match for the bear. 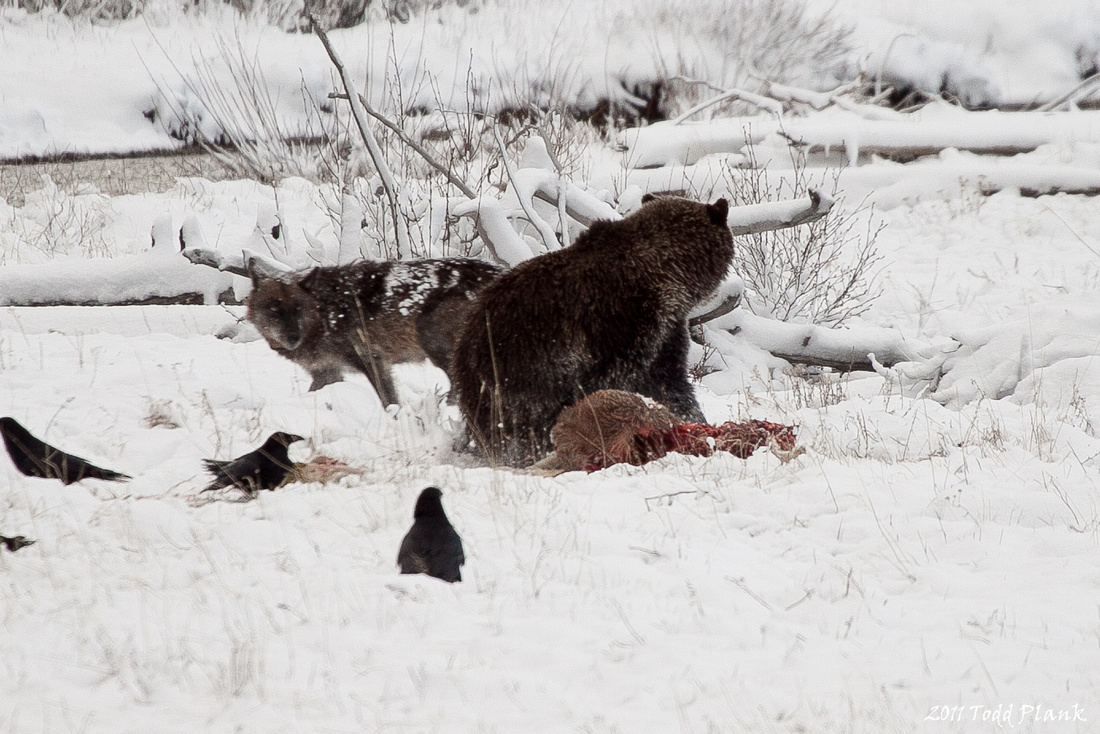 Disgusted at losing the carcass, 755 lets out a little howl. 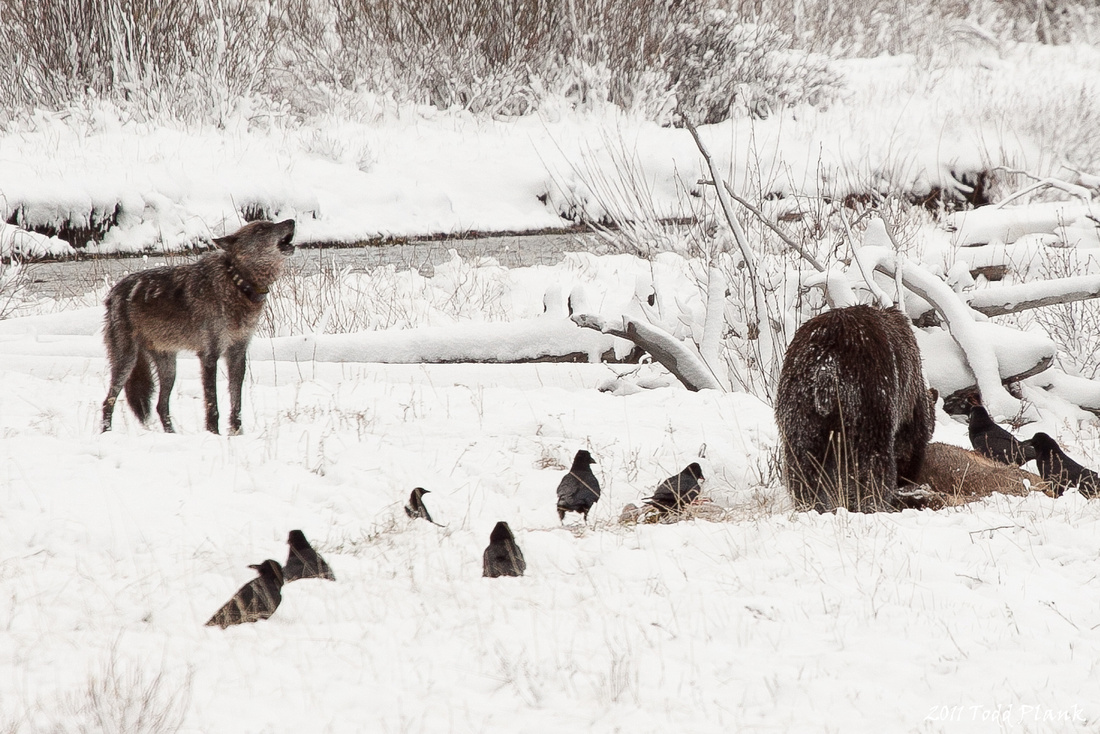 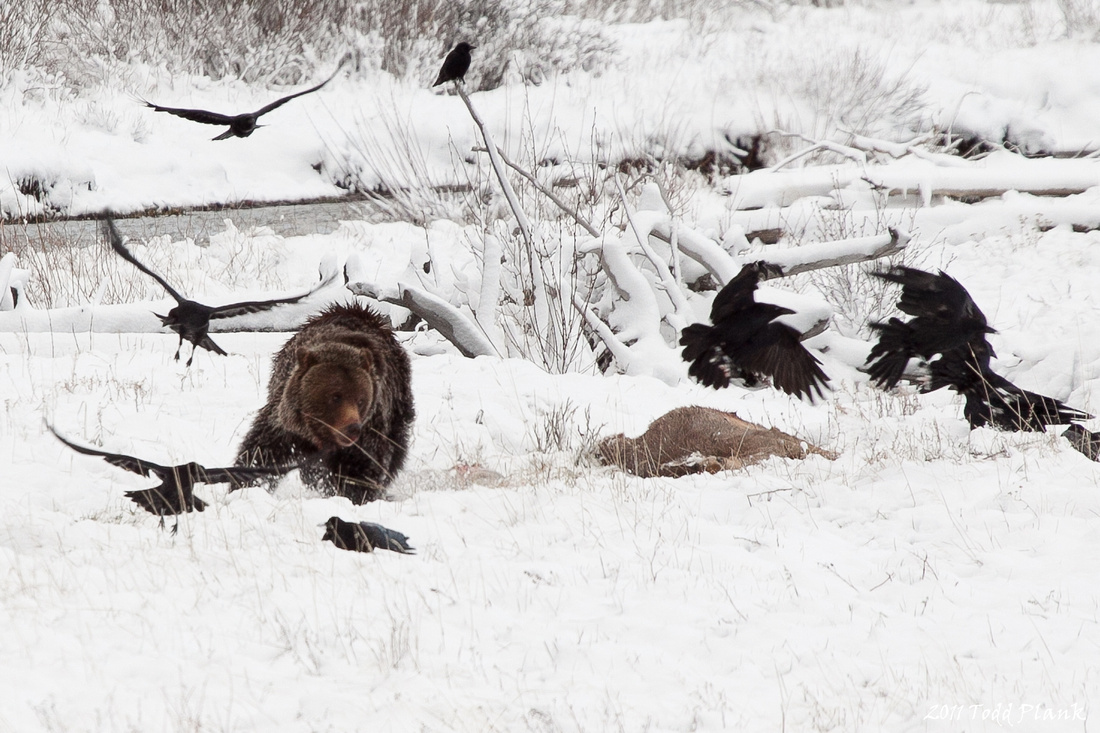 The grizzly bear settle in at the carcass and it was only under an hour since the deer was taken down by 755. Bears have amazing noses. 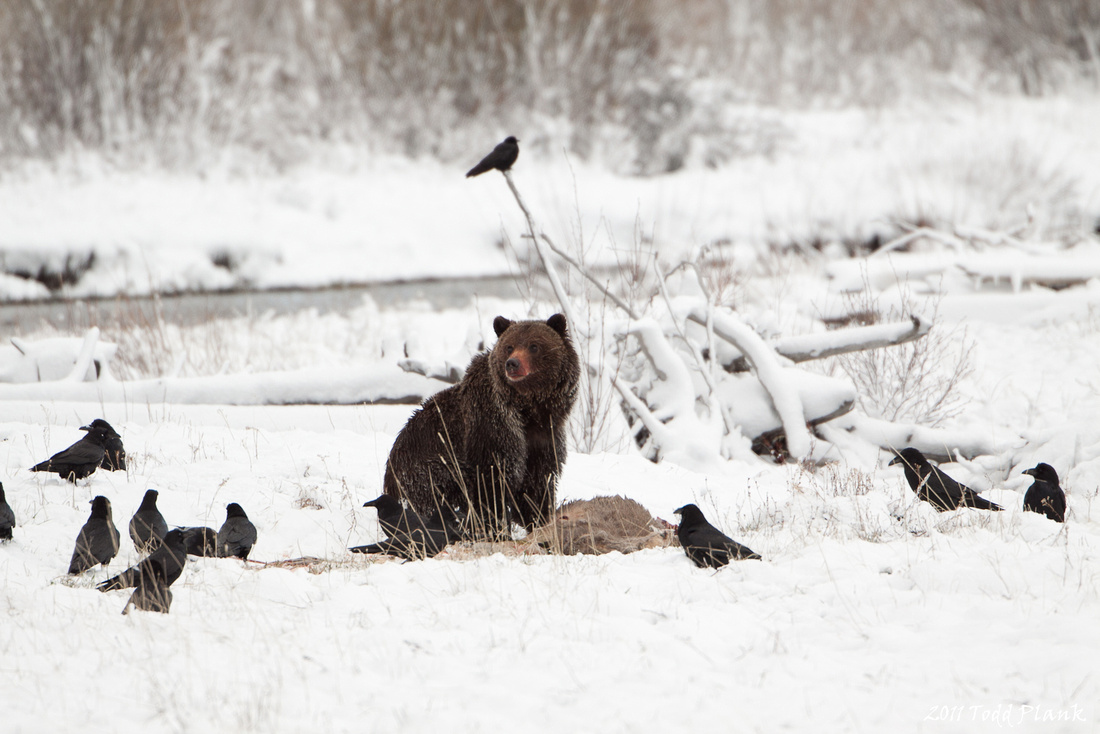 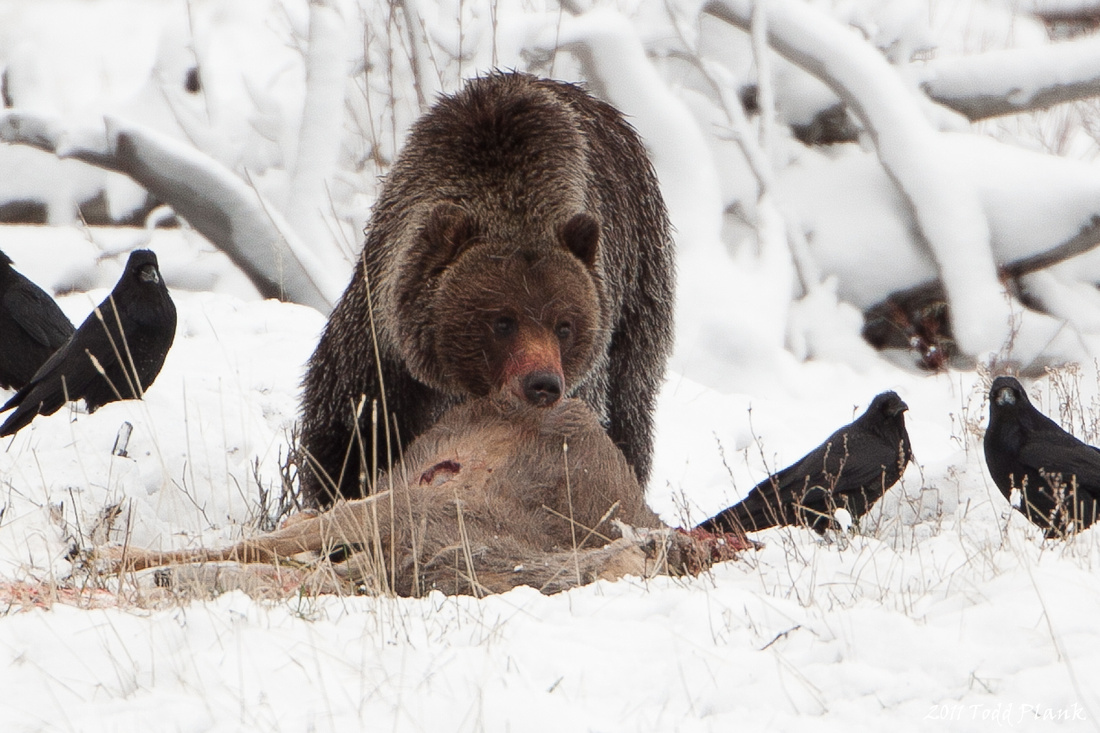 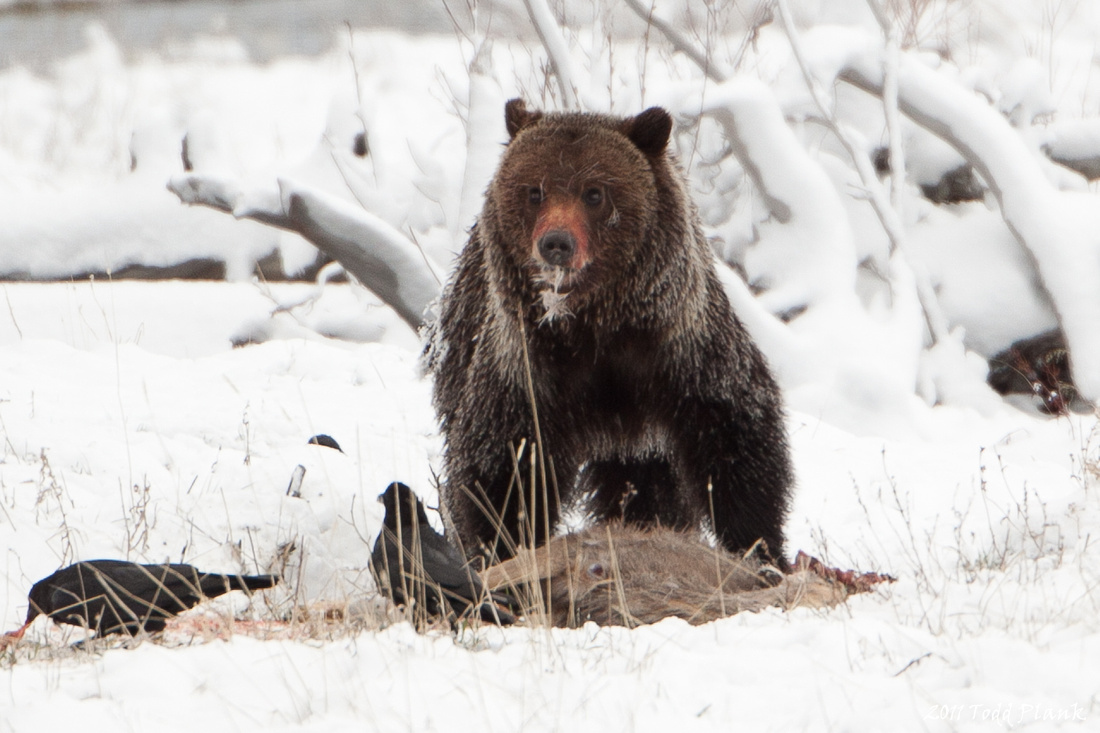 The overnight snow provided a great backdrop for the events of the morning. After spending 2 hours watching everything unfold, we moved down the road looking for our next adventure. We came back later in the afternoon but nothing new had happen or did happen the remainder of the day at the carcass.

Later that same week, down in the center of the park I came across a sow grizzly and her cub of the year (COY) moving through an open area with snow falling. 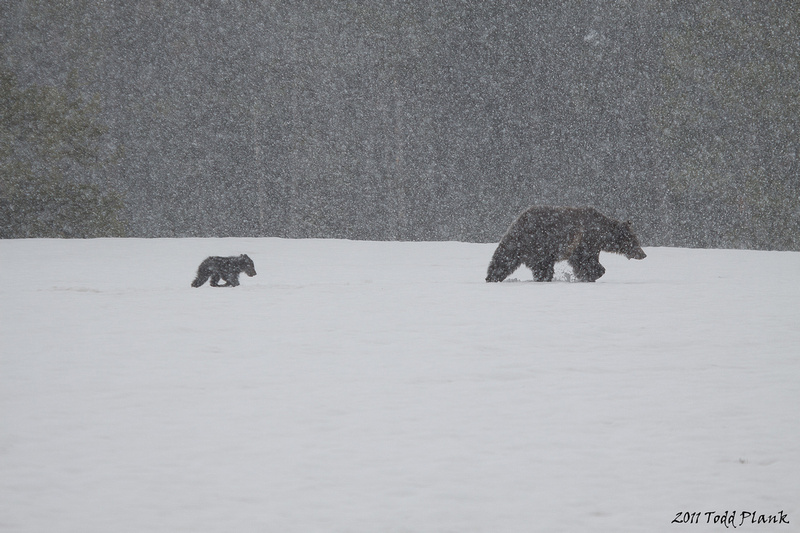 There were foraging for food, the COY mimicking it's mother digging in the snow. 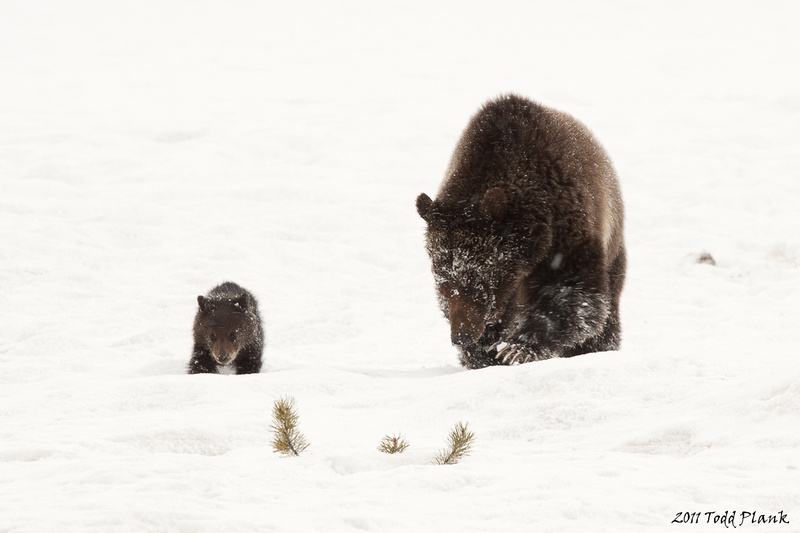 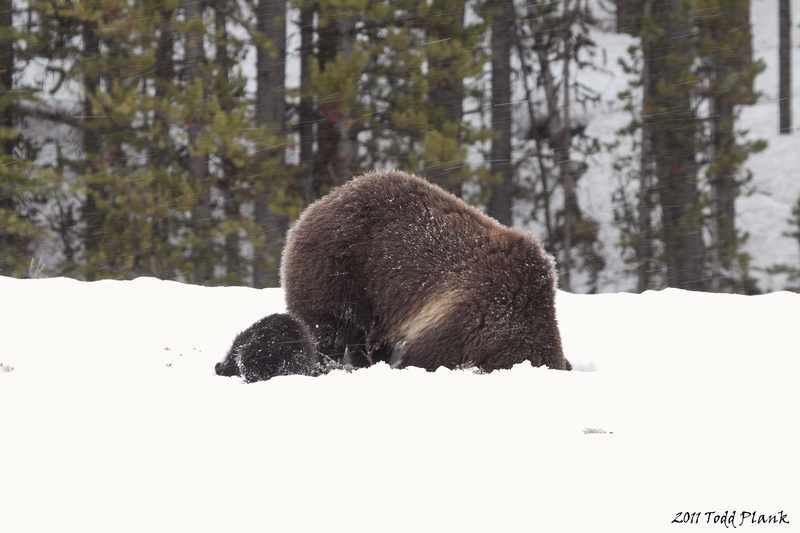 Yes, I'll stay right where I am at a nice safe distance. 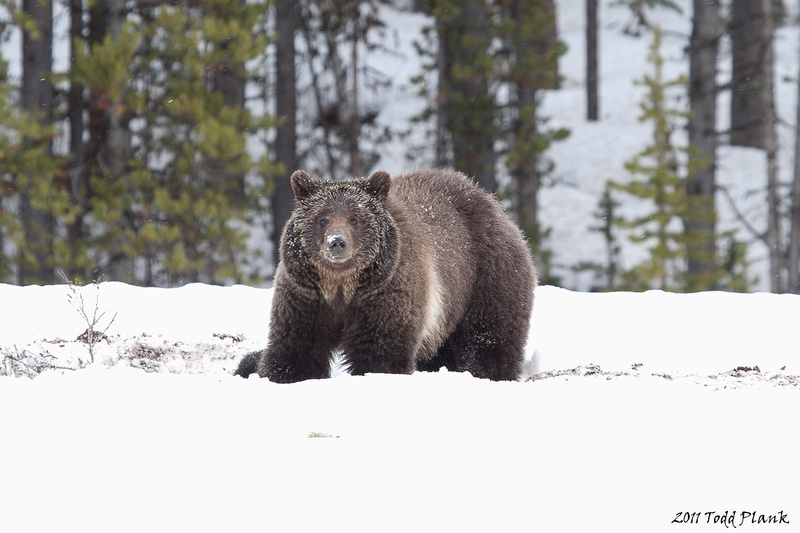 COY getting lost in a hole 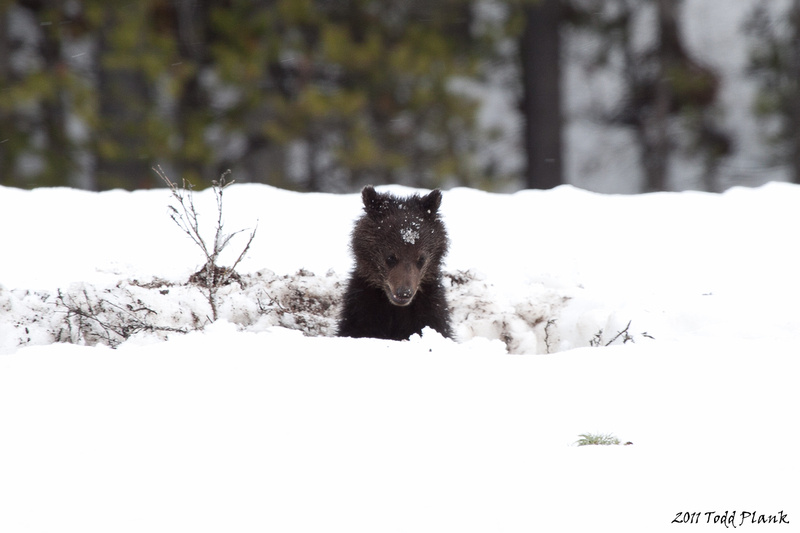 When COY get tired,  hitching a ride is the way to go. 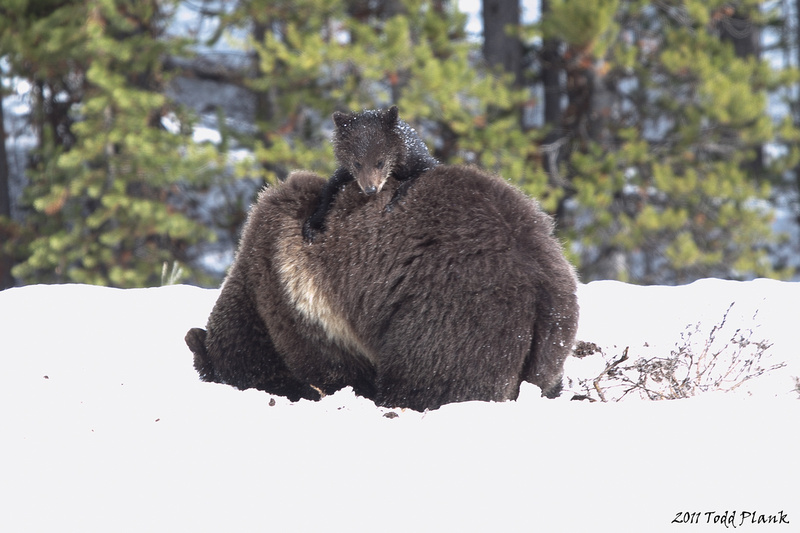 Better yet!  Mom comes up with a vole in her mouth from digging in the snow! 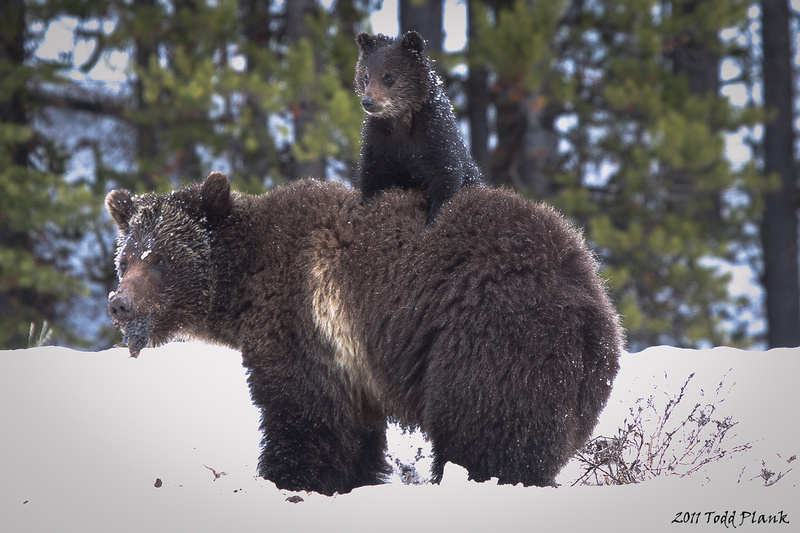 A couple hundred voles to go to satisfy this grizzly bear's appetite. 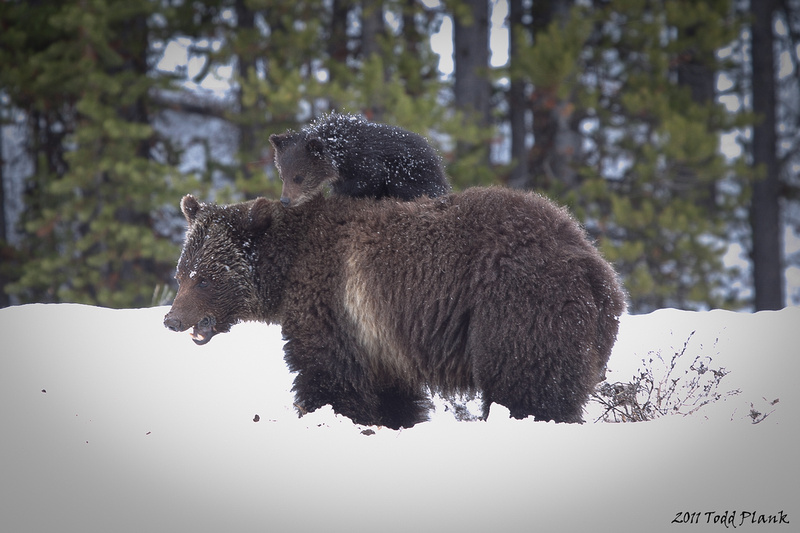